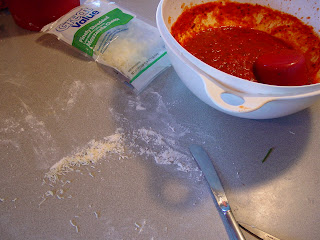 Some wiseguy ( that would be me...Len) thought that cooking meals ahead for the week would be a good idea. Since we're always so busy, it just seemed like a logical way to save time...right? Well Jo had a book written by a woman who supposedly cooks meals for a month at a time. I thought that was a bit extreme, but she did have a version for a two-week plan. That seemed a bit more managable. 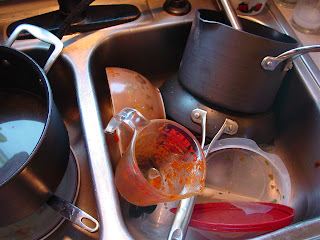 So we started out at the grocery store, pre-planned shopping list in hand. I'm thinking...hmm, this might actually work. And Jo started the "pre-cooking" regimine on Saturday evening. We had already committed to doing "herd health" on Sunday morning, which is generally very physically demanding. And it was. BUT...damn the torpedoes, full steam ahead. 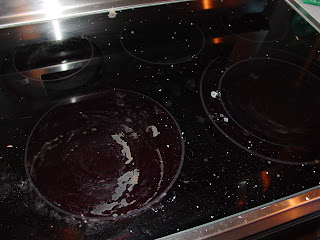 We finally STARTED cooking at about 2 pm. And we cooked, and we chopped and we mixed and we put stuff in freezer bags. Somewhere along the way, the woman who wrote the book miscalculated the fresh onion requirements, and the cooked chicken too. So we finally stopped with only 9 day's meals, but enough spaghetti sauce to make another meal so we whipped that up for dinner. As evidenced by the pictures here, we filled the sink with dirty pots, pans, measuring materials ad just about every other utensil in the kitchen. Most of them, many times over. I don't think the stove top will ever be the same. Finish line...6 pm. 10 meals in 4 hours. I guess I should shelve my plans for a new career as a short-order cook. I guess we'll see, if in ten days, it was all worth it.
Posted by Jo Griffith, Len Smith at 6:56 AM No comments:

The Garden - Half Time Show 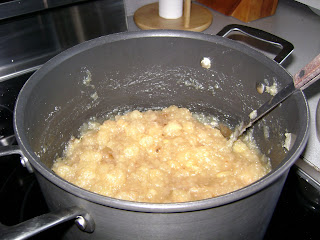 The apples are in. Go figure. I guess that somewhere in between the scorching heat and deer, the apples have decided to throw in the core, so to speak. With our purchase of the farm, we got an apple tree...overgrown and a total mess. Number 1 Son has nurtured the tree, carefully trimming and culling. But this morning, he announced that they had to be picked. Plagued by some kind of rust-bug-rot thing, they were dropping, causing a particularly nasty bee problem. So our lackluster harvest has produced this pot of applesauce which will fill a few bags in the freezer.

This has been a busy year in the garden, yielding frozen or canned broccoli, asparagus from the neighbor, kosher dill pickles, bread and butter pickles, dilly beans, corn, tomatoes (still coming in), zucchini, strawberry and raspberry jam, pesto, and green beans, which live either in the freezer or on the shelf. We also experimented with carrots (not as easy to grow as one might think) and edible flowers (pretty on a salad). As the Farmer sees me hanging out in the kitchen with pots of boiling water, he asks me if it's worth it. After I got last month's electric bill, I'm not sure. Of course there were many factors involved with last month's $540 bill (mainly Met Ed estimating way low the month before and 7 fans running full time to keep the alpacas cool), but still it's hard to say. We have put many meals on the table that were very "local", which is trendy and hip (never thought I'd be trendy and hip at this age). We purchased a freezer pig and a quarter of a steer from the farmer up the road, so entrees consisting of the booty from the garden and the local meat from the freezer have pretty much been the fare around here. We're learning as we go along what types of plants work well for us, which ones to ditch, and are trying to learn some way to keep the bugs/disease from ruining what we're producing.

We've been experimenting with heirloom species, but honestly, to this '60s kid brought up on boxed cereal and pre-sweetened Koolaid with cyclamates, some of these veggies are just plain weird. Not "normal" like you'd pick up at the grocery store. Odd shapes & sizes. So as a cook, you have to make do and work around them. One thing I did do though was make a batch of pickled cucumbers pictured here with the Connecticut Field Pumpkins and some Giant pumpkin variety unknown to us. 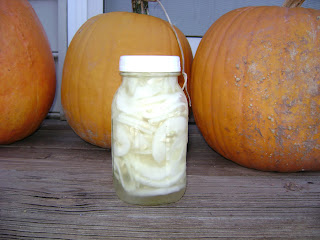 I remember my grandmother making pickled cucumbers and fortunately, my mom had the recipe. This one is a winner and I offer it to you:

Pickled Cucumbers
from the recipe of
Edna Gertrude Heffentreyer Griffith

Cucumbers: Large ones are best, peel and slice thin
Onion: Use a sweet variety and slice thin
Mix the Cukes and Onion together in a bowl
On the stove, mix 1 cup white vinegar & 1 cup sugar. Heat until the sugar is dissolved.
Pour the hot vinegar mixture over the cukes and onion. Put a dinner plate on the bowl and place in the frig overnite.
The next day you can stick them in a jar and keep in the frig. Pickled cukes seem to have an indefinite shelf life as long as you keep them refrigerated (kind of like a Twinkie.) Enjoy!
Posted by Jo Griffith, Len Smith at 4:54 PM 1 comment: