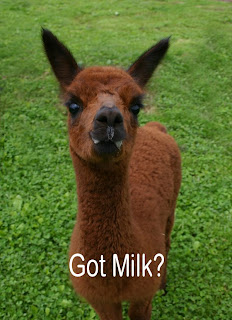 It's been four weeks since Cassandra's Chocolat Isabella was born. She's been growing like a weed, almost doubling her weight already. She's been going from one female to the next, looking for someone to play with. Leah, our only maiden, has been the only one to take much interest in playing... sometimes too much. But "Izzy" has finally gotten sturdy enough to take the occasional kick that results from her over-exuberance. 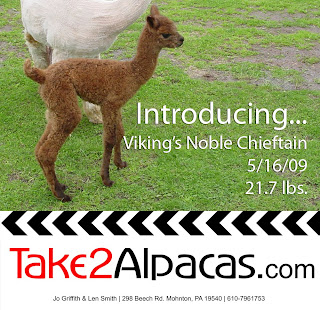 Finally, today she got a playmate her own size...well, sort of.
Peruvian Sonodor (Sonya) our only maiden giving birth this year, was about a week overdue. Officially, she was at 350 days. Her signs of labor began about 7 am. By noon, she was in active labor. Of course, that was just after Len and Max left to run errands. After about an hour and a half of pushing, pulling and wrangling, our first BIG boy was born. At 21.7 pounds, he weighed as much as Izzy did when she was 4 days old.
Both mother and cria were exhausted from the struggle, but after a few hours, everything seemed to be getting close to normal. We've noticed that his hind legs sweep to the right when he stands. Upon researching he issue, it seems this is a fairly common occurrence with larger crias. They just run out of room to grow and get stuck in one position with their legs off to one side. We'll be checking in with our vet tomorrow, but even in just a few times getting up, he seems to be getting better. He's still a bit confused about which legs to get between to nurse. You'll see his mom try to re-direct him, but she's also distracted by Izzy wanting to play. So we put them back in the stall to get some quiet time alone.
Posted by Jo Griffith, Len Smith at 12:44 PM No comments: