I can't believe it's been this long since we've posted anything new. It's definitely a case of "The Cobbler's kids go barefoot".

I guess I'll try to re-construct the highlights from this Fall. In late September 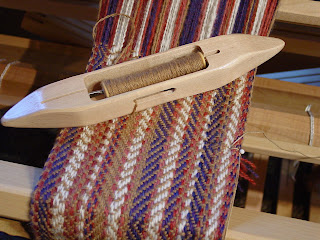 I (Len) decided to go to a workshop to learn how to handweave. After all, we're raising animals that produce fleece, and Jo's been hand spinning for a bout a year now. I thought it time to get in the game. So I spent a week in East Berlin, PA at The Mannings. It's pretty much the Mecca for spinning and weaving in this area. At the end of the class, I ordered my own loom, after getting the confidenc ethat I could do this on my own. It took about 6 weeks to arrive, and I was glad I could still remember what I had learned. Here's a pic of the loom and a scarf in progress:
It's been pretty interesting since I can design and previsualize the project on computer using a free download software. The scarves have been coming off pretty regularly and most are selling as soon as they're finished. I do plan to put some on the website as soon as I can get a respectable inventory of material done.
We also participated in 5 weekends at Weaver's Orchard on Rt. 10 just south of Green Hills. We had a stall with a couple of animals for people to see and touch. Jo brought her spinnig wheel and demonstrated hand spinning. We had a craft for kids, learning how to use a drop spindle to spin yarn. We also had a basic inventory of Alpaca products to sell, from finger puppets to socks and rugs. For no more inventory than we had, we did pretty well. The weather didn't cooperate very well, though. We had at least two weekends wash out and a third ended early because of high wind. It was a good experience though. I'm sure we'll do it again next year. When we would arrive or leave, everyone got a kick out of our transportation mode. We just loaded our two boys into the back of the minivan and rode them down the road to the orchard.
Posted by Jo Griffith, Len Smith at 11:13 AM No comments: